A Five-Year Break, and a New Goal

Aaand I'm back. Though I'd dust off the ol' blog after... five years. Oops.

In my defence, it's been a busy five years! I graduated twice, got married, travelled a lot, moved around even more, bought a house, adopted two pain-in-the-butt cats, and most recently, lost my job at the start of this month. So I finally have time to get back into the swing of things cooking-wise and, consequently, blog-wise.

I'm also using my sudden influx of free time to change the way I eat a little. I'm still vegan - that much hasn't changed - but I'm now trying to eat in a way which helps me build muscle and maintain fitness, whilst scaling down on cost a little (because, y'know, no job and all that). Also, I'll be using this blog to document the progress I make with regards to my newfound passion: Roller Derby.

Last July, on a whim, with no previous experience, I started attending new skater nights with a local team. Five weeks later, I fell, injuring the ligaments in my left ankle & knee. The worst part of it was being off skates for nine weeks while I healed up. I jumped straight back on the track in November, and since then, I've been trying to be the best skater I can be. Thing is, I'm fighting my body's never-ending hatred of anything physical. It simply refuses to make reasonable adjustments, so I'm getting tough on it. Extra training sessions, CrossFit, careful meal-planning, and one hell of a lot of protein.

Hopefully, it pays off.
Posted by Gorgosaurus at 15:10 No comments:

In this post I posted my recipe for vegan dark chocolate brownies, mentioning in the notes that I wanted to experiment with more types of chocolate.

Well, I did. If you change the dark chocolate with the same amount of orange chocolate, and exchange the lemon juice for orange juice, you get a very tasty chocolate orange brownie.

The mixture also makes pretty awesome brownie cupcakes; all you have to do is separate the mixture into muffin liners and cook for less time.

Now all I have to do is find a way to make myself patient enough that I won't eat it straight from the tin.
Posted by Gorgosaurus at 15:44 No comments:

This post is to say a massive thanks to Poppy for my VeggieBoards vegan exchange package! It was amazing, and I wanted to make a post about some of the amazing vegan food they get in the states (that I am very jealous of). 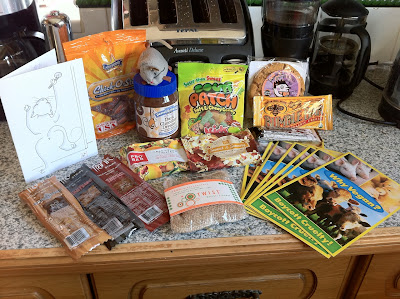 I've actually already eaten a fair few of these products, and they were all delicious. In the box, I found:

-A handful of vegan outreach pamphlets on 'Why Vegan?'. I'm going to give them to people who express interest in going vegan.
-A card with a kitty on it, and a lovely message inside. Do not worry, Poppy, I love everything in my box - especially the 'candy'! (Candy, to us Brits, is something a little more specific... I won't go into it.)
-A catnip mouse for my kitty, Coco. If you put it down in a particular spot, she'll sleep in that spot. She also spent a long time licking the mouse's ear.
-A jar of dark chocolate peanut butter. It's like Nutella, but made with peanuts. This makes it awesome. Before I'd even unpacked the rest of the box, I had the jar open to taste some. I then put it on a toasted bagel. Heaven!
-Sour Patch Kids. That is the one American product I have been desperate to try, ever since I started watching Kyle XY, and moreso since I found out they were vegan. Now that I have them, I'm kind of scared to open them, though. I'm saving them for when I watch a movie this weekend. Although I keep stealing glances at the bag.
-Giant pumpkin spiced cookie. I had to chase my mother away from this with a stick.
-Peanut butter and coconut candy. I'm not normally a fan of coconut, but these are amazing. Crunchy and very peanutty. I love peanuts.
-Kettle Corn bar. I've always wanted to know what kettle corn is like, and now I have it in an exciting bar format.
-Cran-Lemon Twister. Similar to the Kettle Corn bar, but fruity. Or at least, I assume so.
-Choc Chip Cookie Dough raw bar. I kinda wanted to cook it, to see if it would turn into cookies. But before this thought could complete itself, I'd eaten it. It was gooood.
-Bumble bar. The last of the bars; from the wrapper, it looks like it should be made out of honey. It's not.  It's something to do with peanuts, and that's all I can tell you for now because I've yet to eat that one.
-Twist scrubber. For my pans. I've just started using organic, natural cleaning products, so this is a great addition to my small collection.
-Three kinds of vegan jerky. Aside from the sour patch kids, this is the thing I was most excited about. And I was right to be; seitan thai peanut jerky is the best thing I've eaten in a long time. I LOVED it.

Thanks again to the psychic Poppy, who seems to know exactly what I like without being told. If the rest of the box is half as good as what I've already eaten, we're on to a winner. 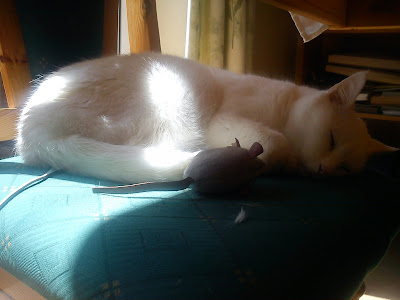 One of those 'throw stuff in a bowl and see what happens' recipes. I wanted brownies, and I wanted to use my bar of dark chocolate to make them. So I did. It makes a fairly small amount (enough for an 8" diameter tin).

Bring a saucepan of water to the boil. Put glass or metal mixing bowl on the saucepan, so that the bottom of the bowl is touching the water but not the bottom of the pan. Add the chocolate and the butter and melt together, stirring until there are no lumps.
Add the sugar to the chocolate mix and stir in. Remove from the heat, but keep the bowl over the water.
In a large mixing bowl, mix the flour, baking powder, baking soda and salt together, before adding the liquid chocolate mix and folding together.
Add the soy milk and yogurt, and mix thoroughly until no large lumps remain.
Mix in the lemon juice.
Pour the mixture into a greased/non-stick baking tin. Cook at 180c for approx 25 mins, until a knife comes out clean. Leave to cool.

Notes:
-The lemon juice is just to cut through the sweetness of the mixture; if you want the brownies to taste of lemon, add another tbsp of juice and a tbsp of lemon zest.
-For extra-chocolatey brownies, add 1/3 cup cocoa powder and another 1/4 cup soy milk.
-Experiment with the types of chocolate. There's a spiced orange bar I really want to try this recipe with some time, replacing the lemon juice for orange juice and adding a pinch of cinnamon.
Posted by Gorgosaurus at 10:08 No comments:

I love baking. Better yet, I love excuses to bake. My boyfriend and I have been quite busy these past few weeks, attending as many gigs as possible, including several dates of the MC Lars/Weerd Science/mc chris/Akira The Don tour. Halfway through this particular tour, I found out that both Akira The Don and Jon Thatcher-Longley (Lars' drummer) had recently had birthdays. So it was obviously baking time. I even got to use my new piping bag to practice making little swirls of icing. And we put little flags in them! They were well received by all, except mc chris, who liked them until we told him they were vegan. He ran off screaming "what have you done to me?!", all the while pulling disgusted faces. It was hilarious.

Here are some pictures: 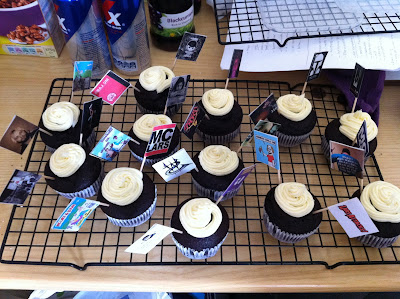 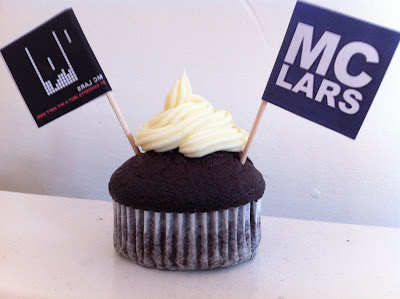 Akira even mentioned them on his blog, because he is a lovely man.
Blog entry is here: http://akirathedon.com/blog/the-tour-the-tour-day-fifteen-liverpool/
JTL tweeted this picture: http://twitpic.com/5566da
Recipe is from 'Vegan Cupcakes Take Over The World' by Isa Chandra Moskowitz & Terry Hope Romero. Basic Chocolate Cupcake with Vegan Fluffy Buttercream Frosting. Buy this book, it will change your baking life. Cupcakes are awesome <3
Posted by Gorgosaurus at 05:53 No comments:

Email ThisBlogThis!Share to TwitterShare to FacebookShare to Pinterest
Labels: Cupcakes

A veganised recipe for an old favourite; Alfredo Sauce. With mushrooms!

Melt butter in a saucepan over medium heat.
Add mushrooms and simmer for a minute until mushrooms start to soften.
Add garlic and simmer for another minute, stirring constantly to stop garlic from burning.
Add cornflour and stir until no large lumps remain.
Pour in soy milk slowly, stirring as you do.
Keep stirring, sauce should start to thicken. If it thickens too much, add more milk until it is the desired consistency.
Add parmesan and stir. You can add more/less to taste.
Just before serving, stir in parsley, salt and pepper to taste.

Notes:
-Great on pasta, or toasted ciabatta bread.
-Mushroom step can be removed if you don't like them; it still makes a good sauce.
Posted by Gorgosaurus at 08:07 3 comments:

I always get a bit giddy when I find a new vegan product to try. Today was no exception when I stumbled across some Vegan Parmesan and Vegan Worcestershire Sauce. I already knew the sauce existed, I just hadn't got around to trying it. But the parmesan was new to me. I've yet to use it, but I did open it up and have a nosey, and it looks like it's going to be good. Smells like cheese, anyway.

Tomorrow, I will be making a spaghetti bolognese with both ingredients in. If it's successful, I'll post the recipe. I'm excited!

Both available at: http://www.mhfoods.net/sl.html
Posted by Gorgosaurus at 14:38 1 comment:

Gorgosaurus
This blog combines two of my greatest passions; a compassionate lifestyle, and food. Vegetarian since September '04, Vegan since Feb '11, and cooking & baking since I can remember. I love to share recipes, restaurant recommendations and product information with others, and the internet is the easiest way to do that. Without it, I'd probably be stopping strangers in the street like a crazy person, begging them to try my latest cookie recipe for themselves.